Phở Bò (Vietnamese Beef Pho Noodle Soup) is the national dish of Vietnam, a dish that many Vietnamese hold dear to their heart. Learn the authentic way to make beef pho and serve it like a true Vietnamese, as well as cooking tips you may not find elsewhere.

The beef pho broth recipe in this post leans toward Northern-style (since we’re from Hanoi) with suggestions to tweak it to be more like Southern-style. You will also find instructions to serve the noodle soup in each style.

What is Phở Bò

“Phở” means rice noodles and “bò” means beef. A bowl of beef phở consists of soft slippery noodles in a hearty, beefy yet fragrant broth and beef slices of your choice. This dish is the most famous Vietnamese noodle soup without any doubts.

Some say pho bo originated in Hanoi while some firmly believe its origin was Nam Dinh, another Northern Vietnamese city a couple of hours away from the capital. Regardless, the dish was created in the North of Vietnam and traveled down South later.

In Vietnam, pho bo is well-loved as a breakfast. A lot of people also eat it as a quick lunch or late night supper. I’d say it’s delicious any time of the day.

Watch How to Cook Beef Pho at Home

When talking about types of beef pho soup, we usually think of two ways of classification, by type of beef toppings and by region.

By Type of Beef Toppings

Whenever you go to a pho joint in Vietnam, you will be presented with various meat topping options, and each option has its specific name. Some popular ones are:

And of course, diners can combine meat toppings for their bowl of pho however they want. Besides the options above, they can also add beef meatballs (mostly in the South), tendons or tripes. Below is a photo of phở tái chín (or phở tái nạm), consisting of both well-done and rare beef.

Besides being the national dish, pho bo is also a topic of interest in Vietnamese literature from a long time ago. Two famous Vietnamese writers, Thạch Lam (1910-1942) and Nguyễn Tuân (1910-1987), both praised that the most traditional and tastiest pho noodle soup is the version with well-done beef. It also happens to be my most favorite type of pho soup, but it’s really a matter of personal preference. My dad, for example, prefers rare beef pho.

Now here’s the bigger debate of what is more delicious, Northern pho or Southern pho? As I have explained in many of my posts before, Northern and Southern cuisines have similarities while being very different. In general, someone born in the North will vouch for Northern pho and can rarely get used to Southern pho flavors and vice versa.

Again, it’s a matter of preference and here are some major differences.

What do we prefer? Our favorite will always be pho bo Hanoi.

This beef pho recipe is authentic with all real, natural ingredients. It is the result of a number of experiments and discussions between us, native Vietnameses who grew up eating pho on a daily basis for over 20 years of our life in the North, and our Saigonese chef friend. The authentic flavors are deeply engrained in us, and this recipe contains tips and secrets you may not find anywhere else.

We also spent a few years living in the US, so we had tried pho in different parts of the US. I think it is not difficult to cook pho at home, and this recipe is very straightforward. It just requires a bit of patience, and the result is better than what you will get at most restaurants.

The hearty and complexed broth of pho noodle soup is the result of slowly and gently simmering beef bones, meat, aromatics, and spices.

I recommend using marrow bones for a deep flavor. Oxtail is an option and we used it in the past. The thing is oxtails don’t contain many bones, so the broth lacks depth even though it is beefy and that’s why you should still add some beef bones. Some other options are knuckle bones and neck bones.

Even when using bones, I think it’s still necessary to add a large boneless cut of beef like brisket and shank to the broth. They will make the broth more beefy and hearty. In addition, you can use them as well-done meat toppings for your pho bowls since they have a combination of meat and fat/muscle, resulting in a nice texture. Use kitchen twine to tie the meat before cooking to retain a nice shape.

Charred onions and ginger add another layer of depth to the broth. If you have shallots on hand, also char and add them for more complexity. You can char aromatics with a grill pan like I do in the video, or broil in the oven. It can take 10-15 minutes to do this, so be patient.

Other ingredients you will need to flavor the broth are salt, fish sauce, and rock sugar. As a Northerner Vietnamese, I still think beef pho needs a small amount of rock sugar to round out the flavors. Chicken pho broth doesn’t need sugar though.

My pho broth recipe leans toward Northern-style, but generally you can tweak the amount of fish sauce and rock sugar to make it more like Southern-style if you want.

The Do’s and Don’ts that Make a Big Difference

Making pho at home isn’t rocket science. It is actually intuitive and straightforward, but there are quite a bit of small details that make a difference. Therefore, please follow the recipe as closely as you can. Here are some important tips to keep in mind:

How to Serve and Eat Beef Pho like in Vietnam

Beef pho is served with different condiments in the North and the South of Vietnam. I will list what is often served in each region and you can pick and choose what you prefer.

Serving beef pho in Northern-style with the following accompaniments:

Serving beef pho in Southern-style with the following accompaniments:

I know there are a ton of pho recipes on the internet, but sadly many are not authentic or the cooking steps aren’t accurate. Also, there aren’t many recipes for Northern-style pho. I hope you will try my version and love it as much as we do. It is the flavor we grew up with in Hanoi, but of course you can tweak it to your liking. Please find detailed list of ingredients and instructions in the recipe card right below.

I’d love to hear what you think about the dish, so please feel free to leave a comment and a rating if you have tried it. New recipes are added every week so let’s connect on Facebook, Youtube, Pinterest and Instagram for the latest updates. You can find my collection of Vietnamese recipes here. 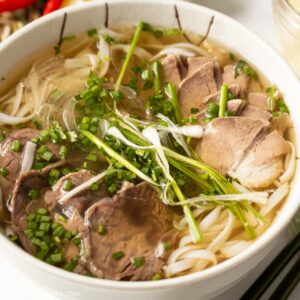 For the Spice Blend

You can serve beef pho with accompaniments of your choice: fried dough sticks (quay), lime wedges and bird’s eye chili, poached egg, hoisin sauce, sriracha, veggie platter with bean sprouts, Thai basil and saw-tooth leaves. Each region in Vietnam use different accompaniments and you can read more about that in the post. The beef brisket and shank can be added any time while simmering the bones. Just make sure to leave enough time to simmer them with the bones since the bones take 6-8 hours while the brisket needs 2-3 hours and shank needs over an hour. The bones can even be simmered for 8-12 hours for stronger flavors. The onions, ginger, shallot and spice blend should be added during the last 2 hours of simmering the broth. If you cannot find beef shank, you can use oxtails instead. Oxtails will need to be simmer slightly longer, around 3-4 hours until the meat is tender. I use this recipe to serve 6 people. You can stretch it to serve 7-8 people by adding a bit more water, fish sauce and rock sugar. Just taste before adding water to avoid diluting the flavors too much My pho broth recipe leans toward Northern-style, but generally you can add more fish sauce and rock sugar and simmer the spices a little longer to make it more like Southern-style if you want. If you also want to serve the soup with rare beef topping in addition to well-cooked beef, I suggest 2 oz raw beef slices per serving. To make ahead the day before and store pho: there are 2 options: To freeze: the broth can be kept frozen very well in a Ziploc bag. The cooked meat can also be frozen whole, and then when you want to eat it, let it thaw and slice.

Calories: 384kcal | Carbohydrates: 41g | Protein: 32g | Fat: 10g | Saturated Fat: 3g | Cholesterol: 76mg | Sodium: 1558mg | Potassium: 678mg | Fiber: 4g | Sugar: 6g | Vitamin C: 6mg | Calcium: 82mg | Iron: 4mg
Tried this recipe?Comment & Rate below or Tag @delightfulplate on Instagram
Liked our videos?Subscribe to our Youtube channel and cook along with us
Disclosure: Delightful Plate is a participant in the Amazon Services LLC Associates Program, an affiliate advertising program designed to provide a means for sites to earn advertising fees by advertising and linking to Amazon.com. As an Amazon associate, we earn from qualifying purchases at no extra cost to you. We only recommend products we use and trust.
Copyright: All content and photos on Delightful Plate are copyright protected. Please do not use them without our written permission. Thank you. 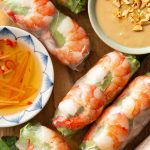