Vietnamese Vegan Pho Noodle Soup (Pho Chay) can be hearty with deep savory flavors. While this vegan pho is quicker to make than traditional beef pho, it is just as comforting and delicious. 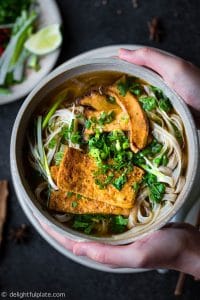 A few weeks ago, I shared a photo of my bowl of Vietnamese beef pho on Instagram. Then I was asked if I had a recipe for vegan pho (phở chay). Up until that point, I had neither cooked or eaten vegan pho. Being exposed to quite a lot of amazing vegan/vegetarian dishes recently, I felt determined to create a vegan version of pho noodle soup.

To my surprise, it wasn’t super challenging, and the result was absolutely satisfying and tasty. I really enjoy all aspects of it, from the vegetable-based broth to the vegan toppings. So, let’s touch on the main elements of this vegan pho before jumping to the recipe.

What is the most important element of Vietnamese pho noodle soup? Of course, it’s the broth. The answer is the same for vegan pho noodle soup. And how does regular beef pho broth taste? It’s aromatic, flavorful, hearty, savory with sweetness from simmering bones for hours.

Since vegetables are naturally sweet, it’s quite easy to replicate the sweetness. The challenge here is how to make a hearty, flavorful and savory vegan pho broth while vegetable broth is usually on the light side.

To make the broth flavorful, savory with umami just like how fish sauce works in regular pho noodle soup, I also use kombu, soy sauce, and fermented black beans.

You can find kombu and fermented black beans at Asian grocery stores. They are both essential ingredients to give this vegan pho broth deep savory flavors and umami. Using soy sauce alone isn’t quite as good, so I think it’s worth a trip to Asian grocery stores to buy them.

We also use all the well-known pho spices here, which are cinnamon/cassia bark, star anises, cloves, fennel seeds, coriander seeds and black cardamom pods. Some of them can be bought at regular grocery stores, and you can also buy all of them at Asian grocery stores or on Amazon.

The most two important spices are cinnamon sticks/cassia bark and star anises. It’s okay if you don’t have the rest on hand. And of course, we can’t forget the charred onion and ginger when making any pho noodle soups. 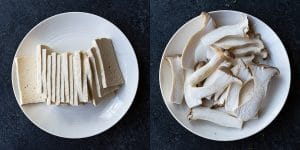 The toppings for this vegan pho are king trumpet/king oyster mushrooms and extra-firm tofu. They are thinly sliced, fried or pan-seared and then infused with pho flavors. They turn out very tasty and even though I’m not vegan, I don’t feel like missing the meat at all.

I like to use large pho noodles, and you can go to my pantry page for Vietnamese pho noodles to read more about it and my favorite brand. I always serve pho with a lot of sliced scallions, some cilantro and onion slices. You can also add beansprouts, birds-eye chili, lime juice, or other vegetables and mushrooms you like.

So far it sounds like a lot of work to make this vegan pho, but it really isn’t. The broth requires only 30-40 minutes of simmering, and during that time you can prepare the toppings, noodles and garnishes.

Making beef pho (both the traditional beef pho soup and the beef stew pho soup), on the contrary, takes hours. More importantly, nothing is compromised in this vegan pho noodle soup. I honestly don’t miss the bone broth, the beef slices or fish sauce at all when eating this. So even if you are not vegan, I hope you will give this a try. It is definitely among my most favorite pho noodle soups :). 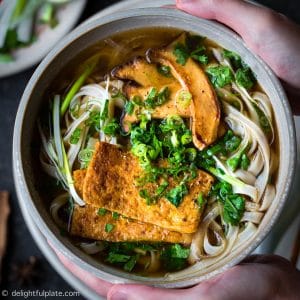 You can find kombu and fermented black beans at Asian grocery stores. They are both essential ingredients to give this vegan pho broth deep savory flavors and umami. Using soy sauce alone isn’t quite as good, so I think it’s worth a trip to Asian grocery stores to buy them. The most two important spices are cinnamon sticks/cassia bark and star anise. It’s okay if you don’t have the rest on hand.
Tried this recipe?Mention @delightfulplate

Disclosure: Delightful Plate is a participant in the Amazon Services LLC Associates Program, an affiliate advertising program designed to provide a means for sites to earn advertising fees by advertising and linking to Amazon.com. As an Amazon associate, we earn from qualifying purchases at no extra cost to you. We only recommend products we use and trust.
Copyright: All content and photos on Delightful Plate are copyright protected. Please do not use them without our written permission. Thank you.
Previous Post: « Pressure Cooker Ground Pork Congee
Next Post: St. Louis Trip: An Itinerary for First-time Visitors » 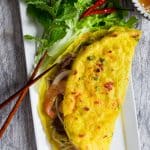 ONE POT
ONE PAN